The ADIX 6076 in Adirondack Scenic Railroad Yard in Lake Placid 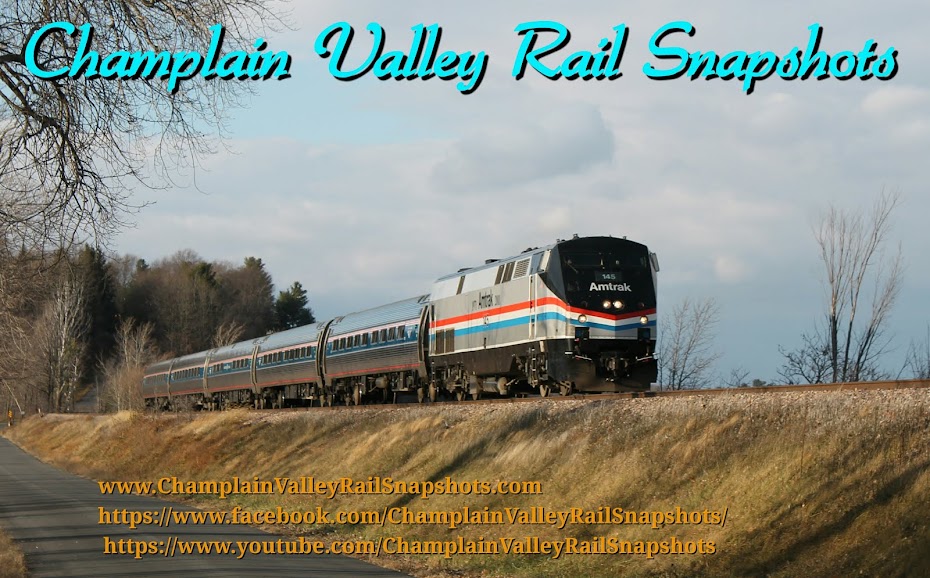 11/(25/26)/2016 A small group of stalwart rail enthusiasts await the appearance of this years Canadian Pacific Holiday Train. This wonderful corporate ambassador is now in its 18th year. If it were a person it would already have learned to drive, vote for parliamentarians, registered for the draft (does Canada have selected service?) and start paying taxes. Not that corporations do all that stuff, especially the last one.
But the Holiday Train is a time to set aside those squabbles, and wonder and awe at the dazzling display and the talented performers, and hopefully think of our fellow man. One of the great accomplishments of the train is how they collect food and donations for local food shelves, and raise awareness for healthy living. Despite what must be an extraordinary cost associated with putting together and running two of these trains around North America, Canadian Pacific, whose heritage goes back to the 1880's and the goal of creating Canada's first transcontinental railroad, has done so for 18 years, and hopefully for many more.
So back to our story, a small group of rail enthusiasts (railfans if you will) gather near Plattsburgh New York's own historic 1800's Delaware & Hudson train station awaiting the Holiday Trains appearance on a dead head move South to Albany. They have finished doing shows in Southern Quebec and now have to move South to run North for shows on Saturday and Sunday.
Generally by the time it runs through Plattsburgh it is after midnight. It depends when the last show was, how much other traffic there is, and how long it takes to get through the border.  Tonight there were two Northbound trains on the agenda to work around.  So first we were greeted by a CP253, a Northbound manifest freight just about midnight, that was lead by usual GE road power, but the trailing unit was a surprise sighting of a CP EMD SD40-2 the 5833, recently pulled out of mothball for the upswing in traffic.
We heard on the radio that there was a Northbound 931 about a Norfolk Southern/ Canadian National run through that comes up the CP. It got told to wait at Bluff for Santa Claus!
The temperature was in the mid-30's and we were all dressed appropriately,having been veteran's of late night station gatherings before, and passed the time talking and telling stories. Finally around 1 am we heard faint whistling in the distance then suddenly the radio sprang to life and gave the read out from the Spellman Rd. detector at mileage 173. A few minutes later we could hear the engineer laying on the horn coming through town, and at 1:09 am she came into view, with the CP 2246 in the lead, a locomotive that started life as a GP9 in the 1950's and now rebuilt as part of a new class of modern road switchers, GP20ECO, and for several years has had the honor of pulling one of the Holiday Trains.
The Holiday Train came and went in mere seconds, but glancing on that dazzling array of lights, you can't help but being struck in a daze of awe.
I hope everyone gets to see the Holiday Train at least once. Remember to bring a donation for your local food shelf when you go!
Thanks Canadian Pacific! And safe travels to the crews and performers! And good luck to the dispatchers that keep it on its tight schedule and the maintenance of way workers that keep the tracks safe and open for its journey!!!
#CPHolidayTrain
Posted by Champlain Valley Rail Snapshots at 9:56:00 PM

Promote Your Page Too